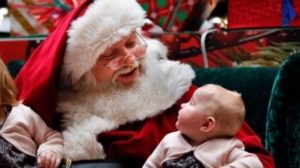 Merry Christmas and Happy Holidays to everyone!
This holiday edition of Chatter is short and sweet.

Great conversation with my Pops last week discussing a variety of nonsensical issues.  Somehow it led to what I’ll call my Christmas gift to all of you. My very wise father and I arrived at an important life conclusion and I want to share it.

So here it is…

The best way to achieve “true happiness” (very elusive for most) is to focus your time on setting up all of the people that you love to succeed. And then you really enjoy it when they do and you celebrate it with them.

Think about how grateful you are and how much you “give” to those who give a lot to you.

You want to improve your mood and your relationships with others? Well I just gave you the Holy Grail.

Ah, perception of ourselves….what a very tough thing to get a grip on.  Many overvalue (most do in fact), some undervalue.  How do I get a good gauge of my worth in the workplace?  Or within the team I’m on?  Interesting questions for sure.
It’s so situational isn’t it?  The kid that doesn’t think he is very good but is ultra-talented vs. the cocky salesman who w-2’d 41k the last 3 years.  Neither is desirable but certainly the latter needs a reality check.

Now here at Chatter we are BIG ADVOCATES of THINKING BIG.  For sure it’s the only way to go.  You gotta think anyway right?  Might as well be big.

But let’s not mistake that for having no clue, no self-awareness and walking around life in a fog.  We have all seen so many people in our day that think they are worth “x”, and move themselves right out of a great situation.  Not smart. All the names come to mind as I type this of the guys that were moving along nicely, only to have some not well-intentioned person get into their ear.  Not good.

So what exactly happens when people overvalue themselves?  What are the pitfalls?  Well, they end up trying to get so much more for themselves than they deserve and sometimes end up in a situation where they are worse off. They gain a sense of such false entitlement and really lack self-awareness.

Here are my observations of the top 5 reasons people feel they are worth way more than they really are:

1.          They have absolutely no awareness of what’s really happening in the world and where they fit in.  Knowing your worth and what you’re best and not so great at are so important.  Only way to fix this is to ask your friends, boss and mentors to be brutally honest with you.  It can really help.
2.          Their parents gave them a very false sense of who they were and probably should never have procreated.   Again, let’s refer to mentors jumping in and saving the day.  The parents didn’t need a license (you should have to have one to have kids……future blog for sure).  Can’t totally rely on them.
3.          Their first job (first jobs are key!!) was such a horrendous environment with such bad people they were actually made to believe they were good. (Future blog on this very subject is upcoming)
4.          They have become so good at bullshitting thru their entire life, they just can’t stop.  And then the bullshit they tell everyone else, carries over to their own internal thoughts.  Now they bullshit themselves nonstop.  Now the “it’s not me, it’s everyone else” syndrome starts to kick in.  Not good.  Really not good.
5.          Their friends never told them the truth and they hung out with all the wrong people (future blog on STRONG PEER GROUP essential to success upcoming) so they never surrounded themselves with people who would make them better and challenge them.

As you can see there isn’t a lot of good in any of it.  So what’s this week’s lesson?  Pull someone aside you care about in the world that you can see is “underachieving vs. their potential”, and ask them some tough questions.  And try to get them to think. Challenge them, make them more aware and push them to realize who they are today vs. who they could be with a shift in focus.  Make people be honest with themselves.
The Chatter stats say you will only be able to create change to 1 in 7 that you talk to……so my advice……talk to 7 so you can change 1 future.